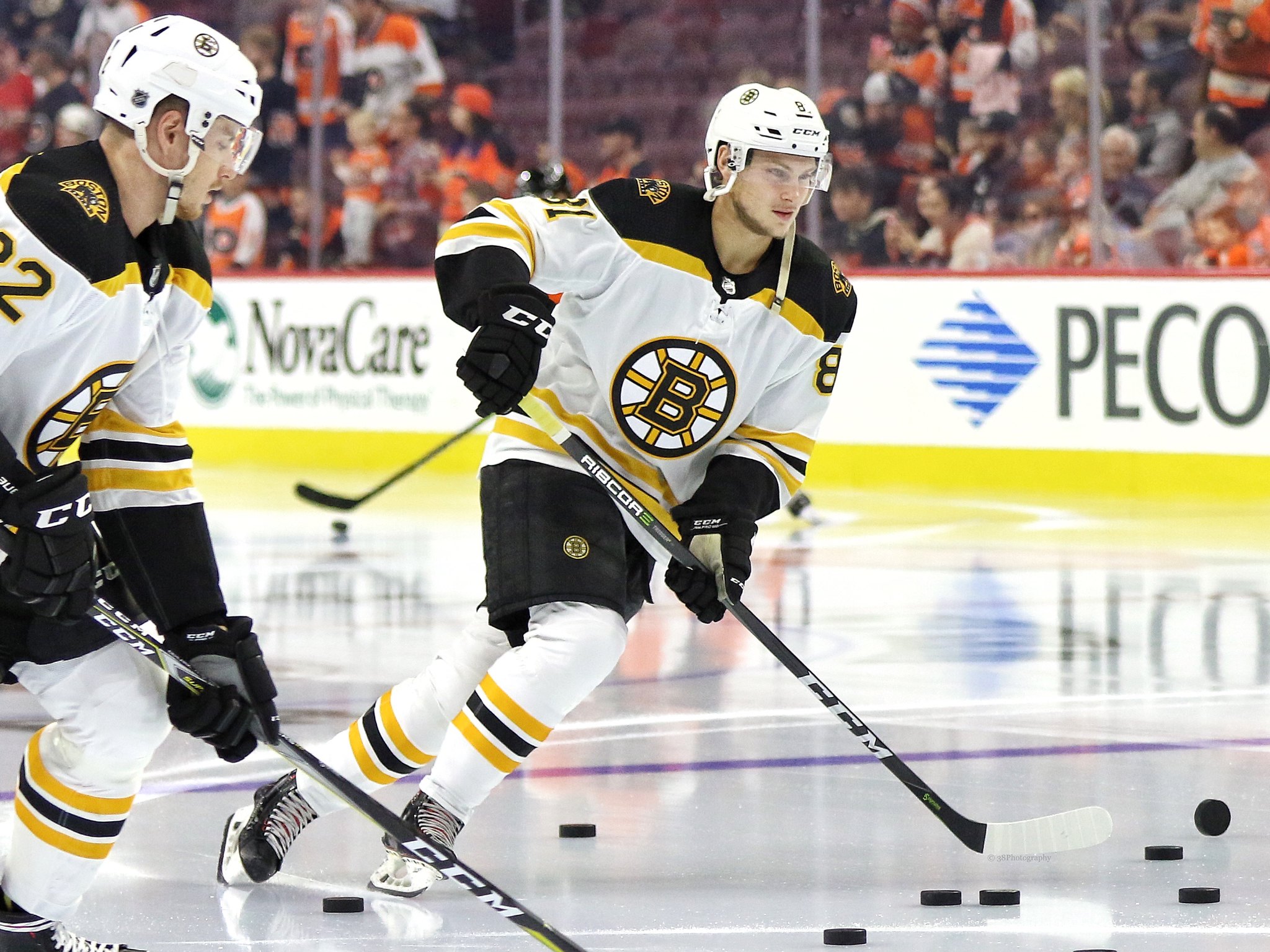 The Boston Bruins are starting to look like legitimate threats now. Since the start of the new year, they have won seven out of their last eight games. With this, they now have a 21-11-2 record and are just five points behind the third-place Toronto Maple Leafs in the Atlantic Division. This is very good to see, as they were very far behind them just a few weeks ago.

Although their stars have been stepping up immensely during this fantastic stretch, they also have been seeing far better results from their depth players and youngsters. With this, it feels like the perfect time to discuss some of Boston’s breakout candidates for 2022. Before beginning, however, it’s important to note that players currently on the NHL roster will be focused on. Thus, Jack Studnicka and Jesper Froden, for example, are exempt from this list. Alas, let’s dive into four specific candidates from Boston’s roster.

Anton Blidh is making it hard for the Bruins to take him out of the lineup. At this point of the season, he has two goals, six assists, and a plus-4 rating in just 17 games. This kind of production from the 26-year-old has been fantastic to see, and this could only be the start of it. Over his last four games, he has a goal and four points. That is far more than the Bruins ever could have asked from him. This is especially true when remembering that he had just three points in his first 38 NHL games over the past five seasons.

Some fans were confused as to why the Bruins selected him to make the opening night roster over former bottom-six mainstay Chris Wagner. Yet, Blidh’s showing the team that they have made the right decision. He is bringing a lot to the bottom six with not only his offensive contributions but also his engagement in the physical side of the game. Let’s see if his breakout season continues during 2022. The one negative aspect about him is that he is eligible for unrestricted free agency this summer.

Many expected Studnicka to be the Bruins’ top forward prospect this season, but Oskar Steen has been. After having just 11 points in 23 games last season with the Providence Bruins, he has 10 goals and 10 assists in just 16 contests this season. This spectacular play has allowed him to get his first prolonged stay with Boston, and he hasn’t looked out of place in the slightest. In 10 games, he has a goal and four helpers.

Steen appears to be on the brink of a legitimate breakout, and that’s exciting to see. The Bruins aren’t known for possessing a strong prospect pool, so seeing the 23-year-old succeeding this much is truly a breath of fresh air. He is going to make it hard for the Bruins to send him back to the American Hockey League (AHL) once more of the team’s forwards get healthy. With this, he may have a real opportunity to take that next step and be a full-time NHL player for the remainder of the year.

When the Bruins acquired Taylor Hall from the Buffalo Sabres last season, there was understandably a lot of excitement about him joining the team. Yet, Curtis Lazar was a part of the trade, too, and now he’s starting to thrive with the Bruins. In 27 games, he has five goals and 11 points. With this, he’s on pace to have a career season. It’s perfect timing in his case, as like Blidh, he is set to become an unrestricted free agent this summer, too.

Lazar was originally a first-round pick in the 2013 NHL Entry Draft by the Ottawa Senators. Although he never blossomed into a legitimate top-six talent like originally expected, he’s been a very respectable bottom-six forward. Yet, one has to wonder if he’s on the verge of becoming a stronger scoring threat with how well he’s been playing. In his last three games alone, he has scored two goals and added two assists. With all of this, it feels fair to say he qualifies for this list.

Urho Vaakanainen is another first-round pick of the Bruins who hasn’t been able to take that next step in his development. Although it’s been frustrating to see, the 23-year-old has looked very good during his most recent call-up. Due to Derek Forbort, Connor Clifton, and Matt Grzelcyk all being in the NHL’s COVID-19 protocol, it has finally opened the door for the 18th-overall pick of the 2017 NHL Entry Draft to get into some NHL action. In four contests, he has recorded three assists and sports a plus-4 rating.

The sample size has been small, yes, but this kind of play from Vaakanainen has been very encouraging to see. This is especially the case when remembering how much he struggled in last year’s stint with Boston. In nine games, he had two assists and a minus-3 rating. One has to wonder if the Finnish defenseman can continue to play this well. If he does, perhaps we will finally see him blossom into a legitimate NHL defenseman. If he keeps playing like he has these last four games, his chances are looking pretty good on that front.

Alas, it will be fun to see how these four perform as the season continues. It’s fair to say that they each are playing quite well for the Bruins. Yet, if they find ways to improve even further, the Bruins could be an excellent place when the postseason rolls around. Until then, let’s watch this quartet very closely.

Michael DeRosa is a contributor who covers the Boston Bruins and Chicago Blackhawks for The Hockey Writers. Since 2017, he’s written and edited for numerous websites. Besides his work for THW, you can also find him on NHLTradeRumors.me, BBallRumors.com, BaseballRumors.me, FootballRumors.me and The Rat Trick.