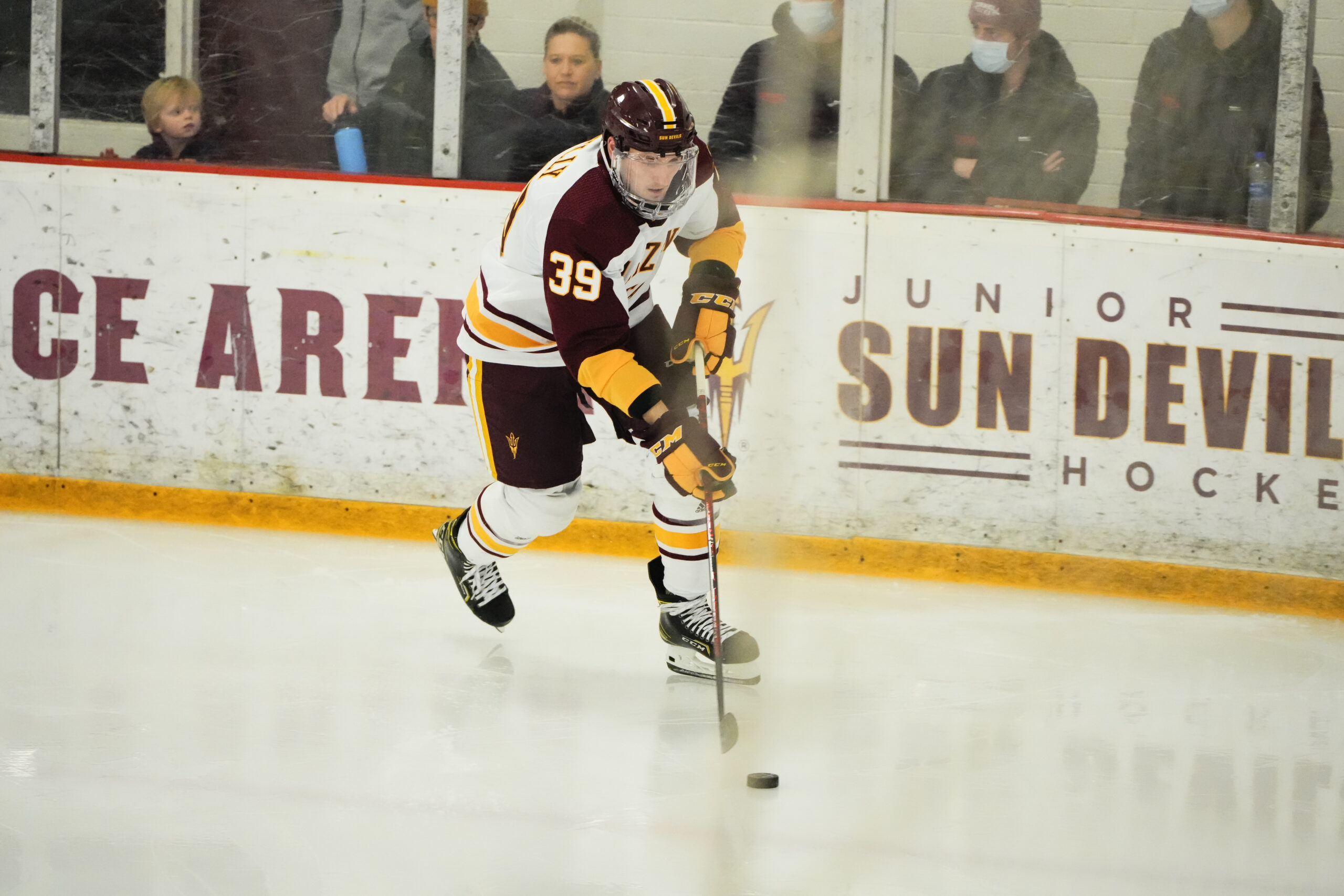 Detroit Red Wings prospect Ryan O’Reilly has a chance to do some special things.

O’Reilly, not to be confused with the St. Louis Blues superstar with the same name, is a sophomore at Arizona State University, and is starting to get noticed. The 21-year-old Southlake, Texas native admittedly got off to a slow start this season after recovering from early-season hand surgery, but things are well on track at this point.

Once he got his conditioning back things really started to click, and as the season has worn on, one thing has become particularly clear: He’s only scratching the surface of his potential, and the best is yet to come.

O’Reilly’s season started a bit later than everyone else’s after missing the first two weekends of play due to the aforementioned surgery, but he quickly recovered and is back to full speed ahead. He recorded just one point, an assist, in his first seven games of the season, but has nine points in 14 games since, including two multi-point games.

The 6-foot-3, 205 pound forward continues to grow his game, and has been especially happy with how things have gone in 2022.

“For me personally, the start of this New Year has gone really well for, and me and [ASU Coach Greg] Powers have been working on my game, to be well-rounded, be like a big, heavy, power-forward,” O’Reilly said. “I want to make sure I’m hitting the net every time, and just playing responsibly.”

“He gets lots of shots off, he uses his big body, knows how to create space for himself now, and puts himself in a position to get the puck in scoring position; he’s got to hit the net,” Power said. “If he just hits the net, it’s going to go through to the goalie and create rebound opportunities for us. He’s got a chance to be a special player.”

O’Reilly has been focused on increasing his on-ice stature, especially given the big frame he already has. He’s admittedly been working hard in the weight room, as well as working with the ASU coaching staff to help become even a more imposing force in games.

Powers said the talented sophomore has an extremely high ceiling, and has improved his two-way game immensely since his arrival in Tempe.

“He has an NHL body and NHL release, you saw his burst of speed, and you saw when he uses it and beats people wide, how effective he is,” Powers said. “He’s really bought into the D side of the puck right now.”

O’Reilly was drafted by the Red Wings 98th overall in the 2018 NHL Entry Draft after spending parts of four seasons in the United States Hockey League (USHL) with the Madison Capitols, Fargo Force, and Green Bay Gamblers. His last season in the USHL, in 2019-20 with the Gamblers, he was an alternate captain while putting up 32 points (17 goals, 15 assists) in 43 games.

That matched similar numbers with the Capitols in 2017-18, when he notched 34 points in 45 games.

All of that led up to draft day in 2018, when O’Reilly was selected by Detroit, a moment he got to experience with his family present, as well. Since then, COVID-19 has stifled the normal development camp opportunities, and his participation in NCAA hockey limits the ability to participate in training camp due to eligibility impacts.

“I’ve been in close contact with [the Red Wings] for the past couple of years,” he said. “I think after this season they’ll have another development camp where everyone will be able to get out, so that will be nice to get out there.”

His numbers this season are quickly approaching what he did in his freshman campaign with the Sun Devils when he put up 13 points in 23 games. His five goals this year are an NCAA career best, a testament to his ability to adapt to a new level of competition.

All of that adds up to a lot of excitement looking into his future at Arizona State.

“His game has evolved immensely this year,” Powers said. “If he keeps trending in this direction and paying attention to detail, and all the little habits that make players good, he has an opportunity to come back next year and absolutely explode.”

O’Reilly’s Future is Bright, Looks For Next Step

For now, the NHL remains a long-term goal for Detroit’s prospect, but as Powers indicated, he has a very high ceiling, and will continue to hone his skills at the NCAA level before taking the next step in his development.

Though they’re still in the midst of their current season, the Sun Devils will need a number of players to lean on next year, and O’Reilly is destined to be one of them. This is especially true as the team says farewell to its longtime home, Oceanside Arena, and moves into a brand new on-campus facility that’s expected to be completed in time for the start of next season.

That alone has given the team’s returning players a lot to look forward to.

“It’s nice to come here and be a grandfather of [Oceanside Arena], close it out, and open up a new building that’s right on campus,” O’Reilly said. “We drive past it every day coming to this rink, and it looks unreal, so you’re kind of eager to get to the new place.”

The new home will afford the opportunity for an all-new core and set of leaders, and that’s something that the Detroit prospect is ready to embrace with open arms.

“I think next year is going to be a really good season for me,” he said. “There are going to be a lot of guys leaving, and we will need guys to step up, and especially with me being a junior next year, it’s going to be me.

“Next year’s going to be a big step for me.”

True, but it may be just the beginning of a budding hockey career.

A die-hard hockey fan in the desert, and proud Iowa State alum. Detroit Red Wings and Arizona Coyotes contributor for The Hockey Writers.