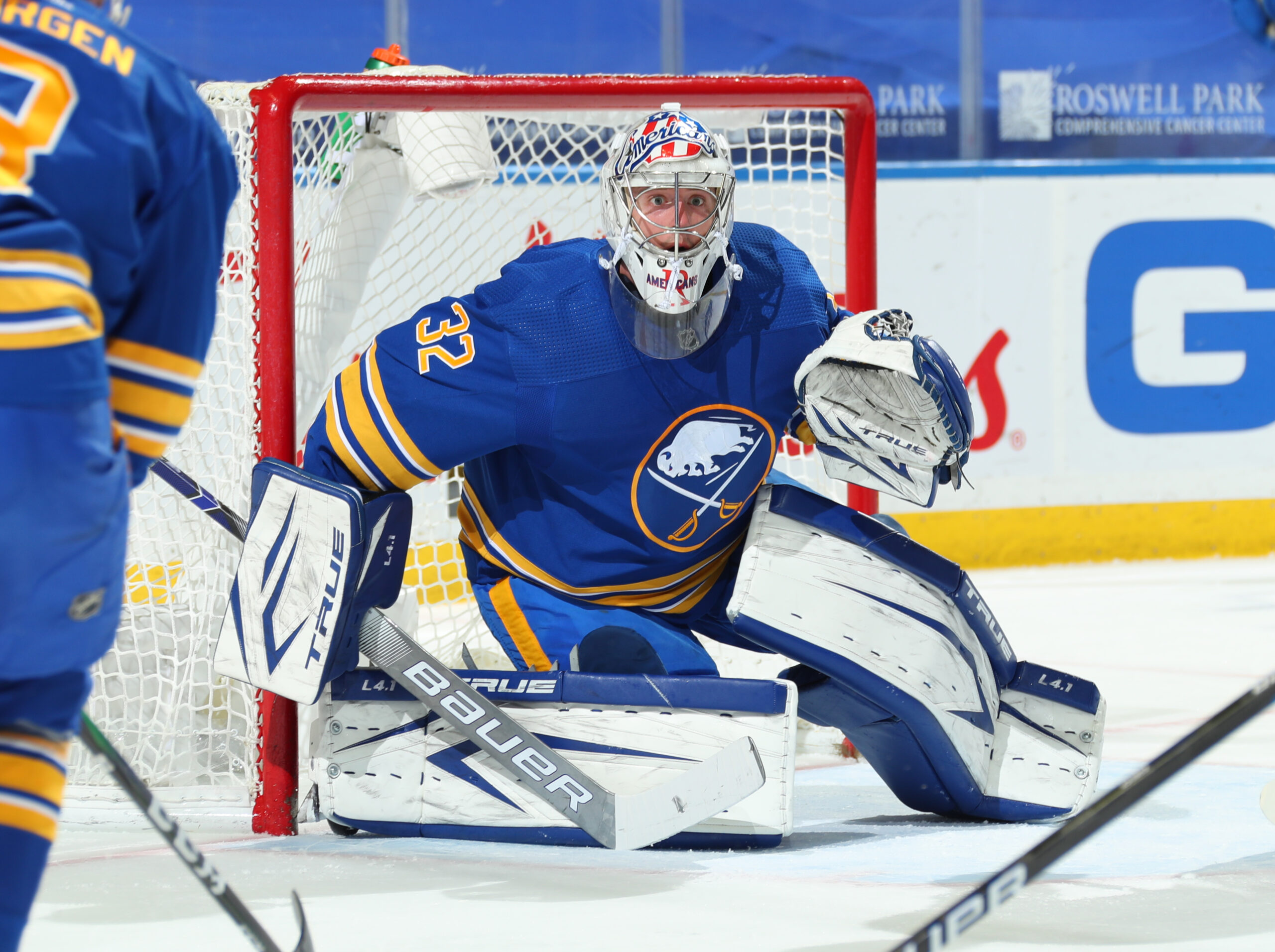 In this edition of Buffalo Sabres News & Rumors, the team prepares to debut its newest goaltending duo of Aaron Dell and Michael Houser, and Rasmus Dahlin looks to continue an impressive hot streak against the Nashville Predators on Thursday.

Dell Likely to Start for Sabres on Thursday After AHL Recall

Dell is back with the Sabres after being recalled from the American Hockey League’s (AHL) Rochester Americans on Wednesday. The 32-year-old goaltender is expected to start in net against the Predators on Thursday, replacing Ukko-Pekka Luukkonen as the team’s starting goaltender while he recovers from a lower-body injury sustained during Tuesday’s game versus the Tampa Bay Lightning. Dell has a .872 save percentage (SV%) in seven games with the Sabres this season.

Although Dell has struggled at the NHL level this year, he has found success in the AHL. With the Americans, he holds a perfect 5-0-0 record, accompanied by a solid .910 SV%. He is still looking for his first NHL win of the season and will look to accomplish exactly that when he hits the road to take on Nashville. The Sabres’ goaltending has been a carousel this season, and Dell is next in line to try proving himself in the blue paint.

Houser Gets a New NHL Opportunity With One-Year Sabres Contract

On Wednesday, the Sabres signed goaltender Houser to a one-year, $750K contract with Luukkonen and Malcolm Subban (upper-body injury) both out of service. He played four games with Buffalo last season, posting a combined .901 SV%. This season with the Americans, he has a .900 SV% in 11 games. Regularly suiting up for Rochester, he now gets another shot at making his NHL dreams come true.

“Houser was an inspiration last year and did exceptionally well,” Sabres head coach Don Granato said after practice on Wednesday. “He’s an overachiever and that’s exactly what we’re about right now and what we need.”

He is expected to serve as the backup goaltender against the Predators on Thursday, but there is a good chance he sees NHL action with Luukkonen’s status week-to-week and Subban’s month-to-month. While it is terrible news the Sabres’ main goaltending duo is sidelined for the next while, it is exciting to have new storylines like Houser’s arise. It will be interesting to see how he does in the big league this time around.

Dahlin is on fire for the Sabres right now, with seven points (three goals, four assists) in his last eight games. The 21-year-old is one point back of Tage Thompson for the team lead in points this season, tallying 22 points (six goals, 16 assists) in 35 games. Despite the Sabres’ rough season, with a 10-19-6 record, Dahlin is prospering and building confidence and success on the ice.

He looks to continue his impressive streak of games against the Predators on Thursday, who are tied for second place in the NHL with a 24-11-2 record. It will be a tough test for the young defenseman, but it should provide him with some great challenges to help elevate his game. Dahlin’s next point will tie his points total from 56 games last season.

The Sabres are in Nashville to take on the Predators, with puck drop on Thursday at 8 p.m. ET. Buffalo is winless in its last six games and is still looking for its first win of 2022. Dealing with injuries and COVID-19 has been a theme for the Sabres this season, and it now enters yet another wave of adversity.

Tom Pepper hosts The Hockey Writers Podcast and writes the “NHL Talk,” “Sabres News & Rumors” and “Kraken News & Rumors” columns every weekday (Monday to Friday). He is a diehard Sabres fan in Toronto and frequently drives the Queen Elizabeth Way to cheer on his team at KeyBank Center. He also supports the Kraken as his team in the West.

Project seeks to launch safe space for hockey people in the LGBTQ+ community.
Thunderbirds’ Cross suspended for one game
‘We will never let his name die’: How NHL players have been inspired by Willie O’Ree
Kelly positive about opportunities in Senators organization
Veteran finds best friend’s T-shirt in the mail, 13 years after he was killed in Afghanistan