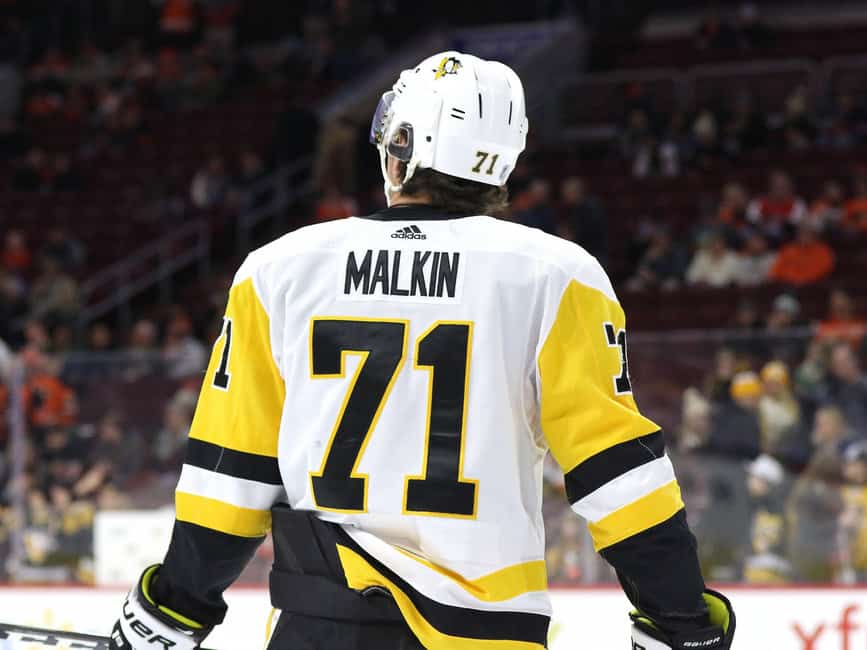 On this edition of the NHL Stat Corner, there is much to discuss, from teams reaching long-standing franchise marks to lots of goals and points. This covers every player and team stat and milestone from around the NHL over the past three days, featuring the Pittsburgh Penguins, Anaheim Ducks, Detroit Red Wings, Colorado Avalanche, Florida Panthers, St. Louis Blues, and much more.

Evgeni Malkin Returns to Pittsburgh Lineup in a Big Way

Evgeni Malkin is the fourth player in franchise history to play in at least 16 seasons. He joins Mario Lemieux (17), Crosby (17), and Letang (16). Malkin scored his 74th career game-winning goal, second-most in franchise history. Only Jaromir Jagr (78) has more. Jeff Carter recorded his 65th multi-goal game while Malkin recorded his 63rd multi-goal game of his career, fourth and fifth among active players. Alex Ovechkin (154), Sidney Crosby (85), and Steven Stamkos (80) have more.

Crosby, Malkin, and Letang are the longest-serving trio in NHL history, playing on the Pittsburgh Penguins for 16 consecutive seasons. With Malkin playing in his first game of the season, they moved past Jean Beliveau, Ralph Backstrom, and Henri Richard (15), Alex Delvecchio, Gordie Howe, and Marcel Pronovost (15), and an active trio of Dustin Brown, Anze Kopitar, and Jonathan Quick (15).

Not to get lost in the shuffle, Jake Guentzel has recorded a point in 18 consecutive appearances, sixth-most in franchise history.

Trevor Zegras is the first rookie to score three-plus power-play goals in a season since Cam Fowler (6) in 2010-11. Zegras is tied for the rookie lead this season in power-play goals with Lucas Raymond. Zegras is the second-fastest rookie in franchise history to reach 40 career points, doing so in 56 games. Bobby Ryan did so in 54 games played. If Zegras hadn’t struggled at the start of the season, that franchise record was all his.

Another rookie, Lukas Dostal, won his first career game in his NHL debut for the Anaheim Ducks. Dostal is the fourth youngest goaltender in franchise history to win his NHL debut (21 years, 201 days). Dostal also set a franchise record for most saves in an NHL debut (33). This occurred in the shootout win over the Red Wings.

Red Wings Rookies Some of Best Crop in Franchise History

Moritz Seider is the third-fastest defenceman in franchise history to record 20 career assists (36 GP), behind only Lidstrom (26 GP) and Jeff Sharples (32 GP). For both Raymond and Seider, this is pretty elite company they join with the starts to their careers they are having. Yes, they have slowed down a bit from their early-season dominance, but as rookies, they are still adjusting to the NHL and will only get better from here.

The Colorado Avalanche have recorded the seventh-most consecutive comeback wins in NHL history (five). This ended in their loss in Nashville in overtime after two third-period comebacks. The team extended their franchise record home winning streak to 12 games.

Cale Makar has the third-most goals in NHL history by a defenceman before game 30 of the season with 16. Only Bobby Orr has more, scoring 19 in 1974-75 and 17 in 1973-74. Just when you think the 48-goal record by a defenceman is out of reach, Makar continues to score and has a real shot of reaching that mark set by Paul Coffey.

Aaron Ekblad recorded his 30th point of the season in his 35th game, second-fastest in franchise history. Keith Yandle reached 30 points in fewer games (32 GP) in 2018-19. While Aleksander Barkov scored his 10th shorthanded goal of his career, third-most in franchise history behind Radek Dvorak (16) and Tom Fitzgerald (12).

The Florida Panthers have recorded 50 points in the first 36 games of a season for the second time in franchise history. The only other time they accomplished this was 1995-96, the season that saw their team go all the way to the Stanley Cup Final. This is possibly the best team the Panthers have assembled, and the topic just keeps coming up as they continue to set and reach franchise marks.

Player & Team Stats & Milestones From Around the NHL

There were some special returns over the past few days from Kucherov and Malkin, and a couple important overtime winners, and many more goals, assists, and points. Check back in a few days for all the latest stats and milestones from your favourite teams and players on the NHL Stat Corner.

Rob Couch is a THW freelance writer covering mainly the Edmonton Oilers and Philadelphia Flyers. He covers everything you need to know about fantasy hockey. He will also keep you up to date with the NHL Stat Corner and trade talks from around the NHL.

You can find more of his work here.