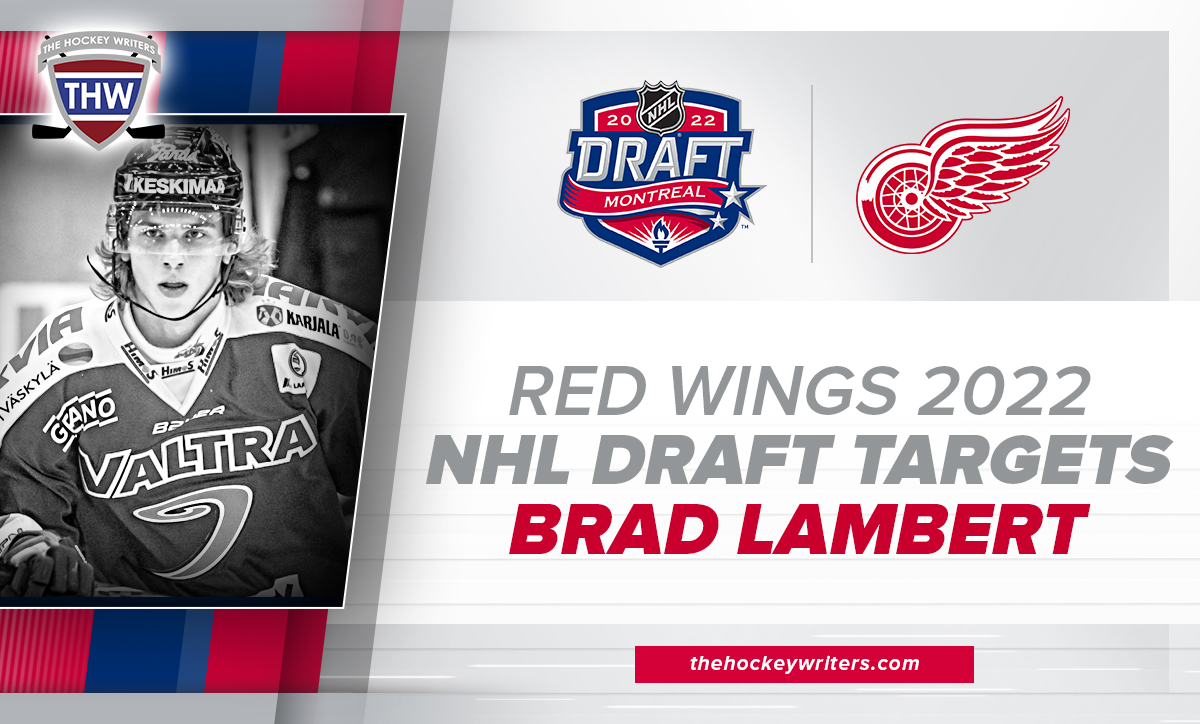 After finishing the 2021-22 season with a 32-40-10 record, the Detroit Red Wings will pick eighth in the 2022 NHL Draft. And while they once again missed out on the top pick in the draft, the Red Wings still have the opportunity to select an impact player at No. 8.

One prospect who could be available when Steve Yzerman steps to the podium is Finnish-Canadian forward Brad Lambert. His unique blend of puck skills, speed, and outstanding vision would give the Red Wings another cornerstone player to build around.

Skating is a broad category, but Lambert appears to excel in all facets of it. He’s not just fast – he’s agile, illusive, uses his edges well, and is an excellent puck transporter.

In fact, The Athletic’s Corey Pronman ranked Lambert as the best skater in the entire 2022 draft class.

“Brad Lambert being atop this list shouldn’t be that surprising to anyone who has watched him for a few shifts,” Pronman noted. (from ‘NHL Draft eligible players ranked by best puck skills, top skaters and more’ – The Athletic – 6/16/22) “Lambert can absolutely fly. He’s a one-man zone entry due to his speed and skill.”

In addition, Lambert has great vision on the ice. He’s a creative playmaker and is a go-to facilitator on the power play. From my perspective, it appears that he thinks the game faster than most of his peers – not everyone is prepared to receive passes or be in the right place, but Lambert knows where to go with the puck. This elevated hockey IQ should translate well to the NHL’s speed of play after a couple more years of development.

This isn’t to say Lambert is a pure setup man. He’ll compliment someone like Lucas Raymond well – both can be threats in the offensive zone with and without the puck. Lambert and Raymond are both able to attract defenders and slip a quick pass over to an open teammate in a high-danger shooting area or take the shot themselves.

That said, some analysts and scouts are concerned about Lambert’s propensity to shy away from contact and play on the perimeter. It’s warranted – he could stand to be more engaged given his size.

There’s also concern about Lambert’s decision to switch Liiga teams midway through the 2021-22 season, jumping from JYP to the Lahden Pelicans. I’m not worried about this – at all. JYP was a bottom-tier squad and Lambert reached the conclusion that playing for a playoff-contending team would be better suited for his development during his draft year. It just so happened that his hometown team—Pelicans—needed another quality forward to bolster their playoff push.

In my mind, this is no different than someone like Luke Hughes leaving the U.S. National Development Team for the University of Michigan ahead of his draft year. Similar scenarios happen across all sports. Lambert and others want to boost their stock ahead of a once-in-a-lifetime event – the draft.

Lambert’s Fit with the Red Wings

Looking at Detroit’s organizational depth, the Red Wings have a clear need for high-end forward talent in their prospect pipeline. Jonatan Berggren, Carter Mazur, and Elmer Soderblom are quality prospects, but aren’t difference-makers. Lambert is, though.

In addition, he has played center in the past – a clear organizational need. Some scouts think he’s a center – others consider him to be a winger at the NHL level. But if he can stick at center, Lambert would give the Red Wings a realistic solution to fill the 2C void behind Dylan Larkin.

Finally, from a personality standpoint, expect the Red Wings to do their fair share of research on Lambert. A few scouts have expressed concern about the forward possibly taking nights off, which is not something you’d want from a top-10 draft pick.

That said, Yzerman is the king of due diligence. Surely, he’ll talk to (or has already talked to) former teammate and current New York Islanders head coach Lane Lambert about his nephew. In addition, Detroit has a large contingent of hockey operations staff in Europe, so there’s a good chance Hakan Andersson, Nicklas Lidstrom, and Niklas Kronwall have seen Lambert suit up multiple times this season.

Between first-hand viewings at the professional and international levels, plus conversations with Lambert’s coaches and family, the Red Wings should have a clear idea of what the forward can bring to the table – and if effort truly is a concern.

Depending on whose rankings you’re looking at, Lambert could be the fifth-best player in the 2022 draft or a fringe first-round pick. That’s some serious variability.

Because of this, trading back could be an option if the Red Wings view Lambert highly. Personally, I see the Finnish-Canadian forward as a perfectly valid pick for the No. 8 draft slot, but also acknowledge the opportunity that lies in his varied perception. If Detroit can trade out of the top-10 and still draft a top-10 (or higher) talent, why not jump at the chance to do so?

“His speed is incredible. He’s a player that can beat defenders one-on-one with the puck and he allows himself to operate at top speed. His instincts are impressive in that he sees the game at a high level as well. He can open up seams and make passes through dangerous slots, but if there’s a criticism around Lambert it’s that he doesn’t use his teammates enough.” –Andrew Forbes, The Hockey Writers

“He plays pucks into space beautifully, gets to the interior (against his peers, at least), splits lanes, cuts off the wall aggressively (though again, more often against his peers than pros), and has a low base to his stride that allows him to extend plays (though he does have a bit of a hunch to his posture, which can put him off balance). He’s excellent on the point and half wall on the power play because of his puck skill, dangerous wrister off the flank and playmaking instincts but he’s going to have to make plays more consistently at even strength to fulfill his top-six upside.” –Scott Wheeler, The Athletic (from ‘NHL Draft 2022 top 100 prospects: Scott Wheeler’s final rankings’ – The Athletic – 6/6/22)

“Lambert is a high-end athlete. His skating ability is explosive. He has great speed and edgework, allowing him to cut away from pressure easily. You combine his skating with strong hands and he’s a go-to guy for zone entries.” –Corey Pronman, The Athletic (from ‘NHL Draft 2022 top 127 prospects: Juraj Slafkovsky leads Corey Pronman’s list’ – The Athletic – 5/31/22)

Tony Wolak is based in the Washington D.C. area and covers the Detroit Red Wings for THW. As a former junior and college hockey player, Tony has a unique perspective on Red Wings topics.