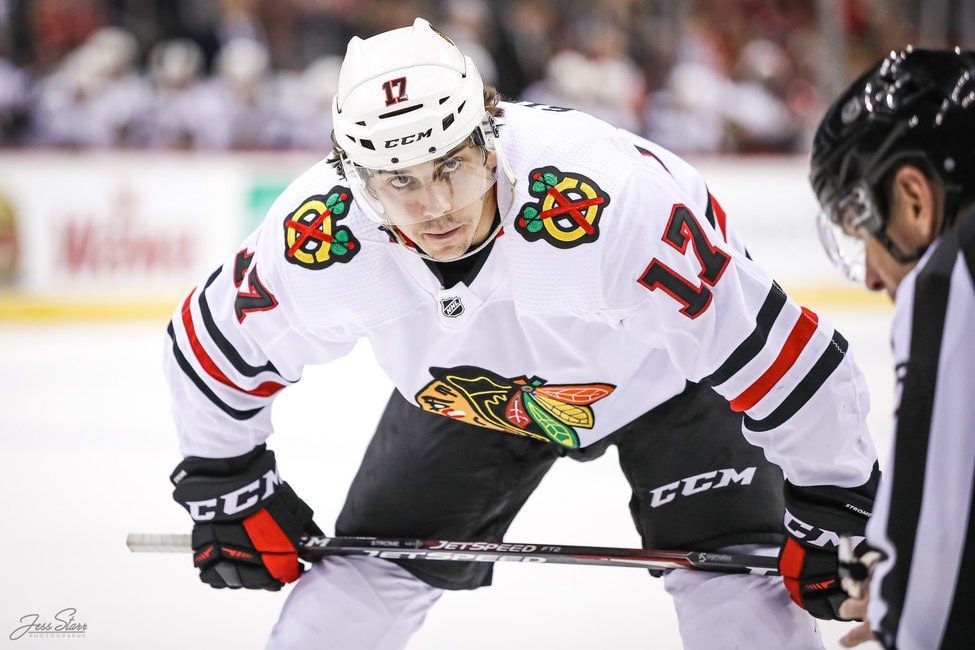 The Chicago Blackhawks appear to be in a holding pattern when it comes to a new contract for center Dylan Strome. Fortunately, time is on their side and something will likely get done before the team heads back onto the ice. Also, the goaltending depth at the minor-league level was bolstered and a hopeful future member of the team is continuing to play well in Russia.

What’s Going on With Strome?

Nobody expected any huge moves this offseason. The Blackhawks have decided to go with a “youth movement” in goal, Brandon Saad was traded, again, and they added some depth down the middle with the additions of Mattias Janmark and Lucas Wallmark.

The only loose end left is Strome’s next contract. Charlie Roumeliotis of NBC Sports Chicago reported on Oct. 8 that Strome was given a qualifying offer. This prevented him from becoming an unrestricted free agent and gives both sides time to work out the right deal.

Time appears to be what is needed in order to come to an agreement. According to Scott Powers of The Athletic, these negotiations may be drawn out for a few weeks.

One source indicated Thursday that it might not happen for some time. With Strome not having arbitration rights, there isn’t a rush for either party to get the deal done. The Blackhawks wanted to square everything else away this offseason before focusing on Strome.

It sounds as if the Blackhawks and Strome expect to get a contract done. It’s just a matter of when. There hasn’t been much discussion yet, the source said.

From “Blackhawks, Dylan Strome slowly work on contract” by Scott Powers – The Athletic, 10/16/20

Powers added that Strome may want a one-year deal so he can negotiate again next offseason when he has arbitration rights. To be continued.

Now that Corey Crawford has moved on to the New Jersey Devils, the Blackhawks will have a competition between Malcolm Subban, Colin Delia and Kevin Lankinen for their 2020-21 goaltenders. This means the Rockford IceHogs will be losing one of their goaltenders for the upcoming season.

Whoever loses the NHL competition will likely become the starter down in the American Hockey League (AHL), with Matt Tompkins serving as backup. Earlier in the week, the IceHogs signed former University of Notre Dame goaltender Cale Morris to an AHL contract.

Morris went 58-28-18 with a .931 save percentage (SV%), 2.18 goals-against average (GAA) and 11 shutouts over his four seasons with the Fighting Irish. His sophomore season was his best as he went 27-8-1 with a .944 SV% and 1.94 GAA. He was named the most outstanding player of the Big Ten Tournament, which Notre Dam won. His season was capped off with the Mike Richter Award, which is given to the best goalie in college hockey. Morris also played two seasons with the Chicago Steel in the United States Hockey League (USHL), prior to heading to college.

The Blackhawks organization is no stranger to Notre Dame products. Bowman, an alum of the school, has drafted Irish players Vinnie Hinostroza and Dennis Gilbert in the past and also forward Landon Slaggert in the 2020 NHL Entry Draft. The team also signed forward Cam Morrison earlier this summer, who was a 2016 draft pick of the Colorado Avalanche.

Keeping our eye on the future, Artur Kayumov continues to impress with Lokomotiv Yaroslavl in the Kontinental Hockey League (KHL). He scored again this past week and is now up to four goals and nine points in 14 games.

The 22-year-old left winger is on pace to break his career-high output from the 2019-20 season. If he continues to score at this rate, he will finish the season with 18 goals and 40 points, which is two goals and 15 points more than he had a season ago.

The Blackhawks originally drafted Kayumov in the second round (50th overall) of the 2016 NHL Entry Draft. He signed a two-year extension with Lokomotiv and will not be able to come over to the NHL until the 2022-23 season at the earliest. He is definitely one worth keeping tabs on.

We will be keeping tabs on all things Blackhawks as this short offseason progresses. Once there is news on Strome’s next move, we will be sure to keep you informed.