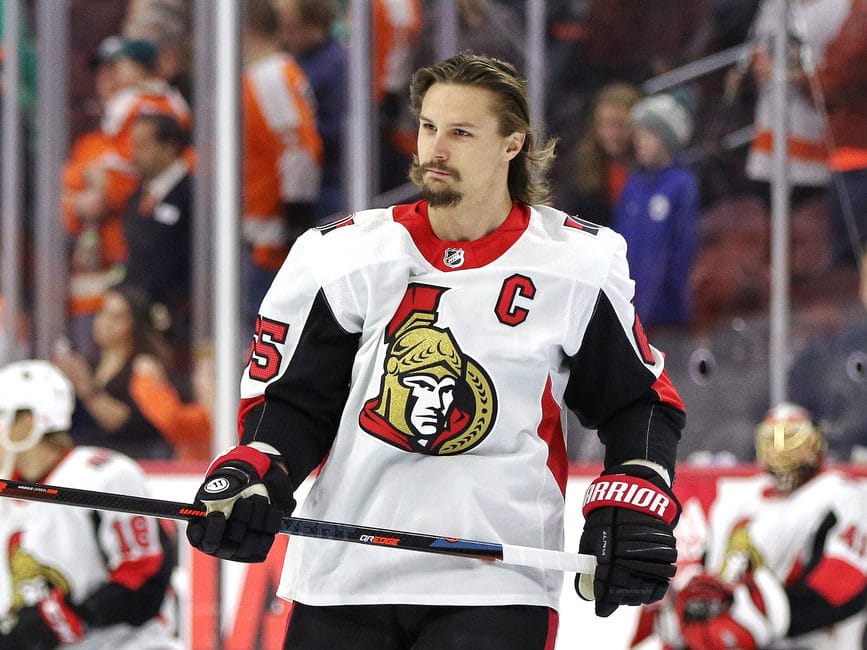 Every NHL season is filled with “feel-good” stories. From individual moments of sheer brilliance to tear-jerking fan interactions or simply a team having a mesmerizing season, these moments make up the dynamic and beautiful game of hockey. During his tenure with the Ottawa Senators, Erik Karlsson’s moment came during the 2017 Stanley Cup Playoffs. Let’s take a stroll down memory lane and examine how he was a “man on a mission” in the spring of 2017.

The Senators entered the 2016-17 campaign with some added “pep in their step” after a disappointing 2015-16 season when the club failed to qualify for the playoffs. New head coach Guy Boucher instilled confidence in the team right from the start and his team-oriented, defense-first mantra, paid instant dividends. Karlsson, as team captain, was eager to get his team back in the playoffs.

Under Boucher, the Senators were pesky, “in your face” and had the personnel to blow the game wide open in the blink of an eye. By early April, they were playoff-bound and finished the regular season with an impressive 44-28-10 record and were in second place in the Atlantic Division with 98 points. Few could imagine how the next few weeks would unfold.

Shipping Up to Boston (Round 1)

The first round of the playoffs saw the Senators lock horns with the Boston Bruins. After dropping Game 1 on home ice, the Sens needed a big response in Game 2. They got it with the superb play of Karlsson. With 12 minutes remaining in the third period, He picked up the puck along the boards in the offensive zone and skated his way past two Bruins, before placing a perfectly-weighted, cross-seam pass to Derrick Brassard to tie the game at three. Karlsson’s skating ability, vision, and passing were on full display as he froze every Bruin before setting up Brassard. The Senators won the game in overtime and tied the series at one.

The Senators secured a key victory on the road in game three with perhaps the greatest assist of the postseason. Early in the first period, Karlsson received the puck behind his own icing line and threw an “alley oop” style pass that landed right on the stick of winger Mike Hoffman, who supplied a delicate finish past Tuukka Rask in the Boston goal. In overtime, Karlsson’s acceleration and vision supplied the secondary assist on Bobby Ryan’s winning goal to give the Senators a 2-1 series lead. Karlsson was a thorn in the Bruins’ side all series.

Despite the offensive accolades, Karlsson also helped limit Patrice Bergeron and Brad Marchand to just three goals combined during the six-game series. Whether he was skating the puck out of trouble or using his body and high-hockey IQ to squeeze out of tight spaces, which is hard to do in the playoffs, #65’s play was a noteworthy all series. Karlsson and the Senators moved on and had a date with the New York Rangers in round two.

There was more third-period drama and heroics from Karlsson and the Senators in Game 1. With just under five minutes to play in a hard-fought, highly contested game, Karlsson supplied the offense to give the Senators a 2-1 lead from a near-impossible angle as he pinched down from the blue line. His goal was the eventual game-winner, and the Sens took Game 1 at home.

Games 2 and 5 were more of the same from Karlsson, who had one assist in Game 2 in the dying seconds to tie the game and added three assists in Game 5, including an 80-foot, tape-to-tape stretch pass that led to Kyle Turris’ overtime winner. The Senators who had conceded the first goal in every game up to that point in the series were headed back to Madison Square Garden (MSG) with a 3-2 series advantage.

On the road in Game 6, the Senators (finally) got off to a good start after Karlsson’s point shot was tipped in by Mike Hoffman for a 1-0 lead. Then, late in the second period, with the Rangers pressing for the equalizer, it was, you guessed it “the Predator”, Karlsson, who picked up the puck, effortlessly danced through the neutral zone, and coolly finished off a sweet feed from Ryan. This goal put the “dagger” in the Rangers’ season. Despite trailing for most of the series, the Senators, and their “never say die” attitude, defied the odds again and moved on to the Eastern Conference Final. Their opponent? Sidney Crosby, Evgeni Malkin, and the Pittsburgh Penguins.

Round three had two excellent teams battling it out in nail-biting fashion right to a pivotal seventh game. Pittsburgh and Ottawa exchanged punches through the first six games of the series, and they entered Game & with a spot in the Stanley Cup Final on the line. Karlsson supplied key assists on the Senators’ first and second goals that night scored by Mark Stone and Ryan Dzingel respectively.

The Senators lost the game in double overtime, in heart-breaking fashion, on a series-winning goal by Chris Kunitz. Karlsson did all he could, but Ottawa’s dream had come to an end.

The Case for Karlsson

Karlsson’s performance in the 2017 Playoffs was more than just statistical production. What’s more telling is how he played, seamlessly “willing” his team to victory with a “never give up” attitude night after night. Comeback after comeback, many times in dramatic fashion, were led by the captain himself. When the chips were down, he rose to the occasion with his wit, end-to-end skating ability, a game-breaking assist, or a big goal. There’s a belief that some players raise their game to a whole new level in the playoffs. When you look at that particular postseason, Karlsson was one of those players.

At the time, various reports had surfaced that Karlsson was playing through injury. He had a hairline fracture in his foot, to be exact, making his contributions all the more impressive. In that improbable run, Karlsson and the Senators battled it out in 19 grueling games. Karlsson tallied 2 goals and 16 assists, a near point-per-game pace to lead the team, and posted a plus-13.

His play was worthy of Conn Smythe consideration despite that his team didn’t advance to the Cup Final. When we look back at the 2017 Playoffs, today, 10 years from now, or even 20 years down the road, we will vividly remember Karlsson’s play and how he put on a performance for the ages.

My name is Domenic Lunardo, and I cover all things Blue Jackets here at The Hockey Writers. I am an avid Toronto Maple Leafs fan living in Toronto, with an unmatched passion for the beautiful sport of hockey.