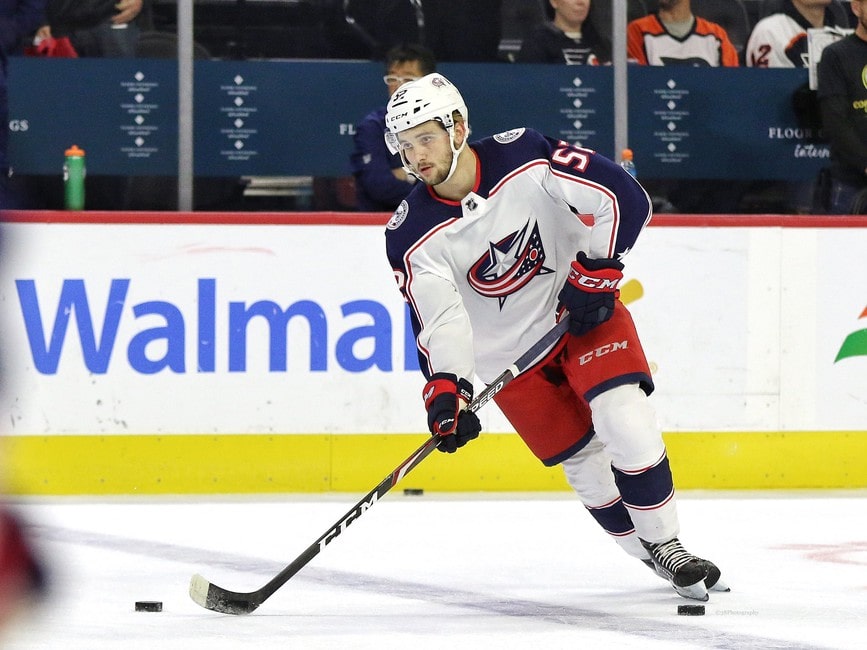 The Columbus Blue Jackets wrapped up their offseason to-do list this week. In the process, they made very clear where one of their young players stood with them.

On Wednesday, the Blue Jackets signed RFA winger Emil Bemstrom to a two-year contract worth $1.8 million total, an AAV of $900,000 per season. It is a one-way deal for both seasons.

In case you had any question about what the team thinks of Bemstrom, this contract is all you need to know. Despite going through long stretches of inconsistent play, the Blue Jackets continue to believe that there’s a good player here. GM Jarmo Kekalainen had this to say about him.

“Emil is a skilled and offensive forward who has the ability to find the back of the net with an accurate shot. He is young and still developing but we believe he has a lot of potential to become an important part of our organization over the next few seasons.”

The key words are in that last sentence. Kekalainen said over the next few seasons. That’s a big thing to admit given the glut of wingers on the roster. Bemstrom isn’t even guaranteed a roster spot come the fall. If he’s going to start paying off the Blue Jackets’ belief in him, he needs to start making it happen now.

Bemstrom started off his career with a bang. In 56 games in 2019-20, he scored 10 goals and 20 points. He made his living on the power play scoring five of his goals on the man advantage.

It was easy to see why the Blue Jackets put Bemstrom on the power play. He can shoot the puck. If you give him time and space, he can finish. The issue of late has been confidence and consistency.

In his 61 games played the last two seasons, Bemstrom has scored nine goals and 16 points. The key difference is that of those nine goals, just one came on the power play. All six of his goals in 2021-22 were scored at even strength.

While Bemstrom has 19 career NHL goals, the general feeling is that he should have more. He gets opportunities. He hasn’t been able to consistently put it all together. The Blue Jackets hope the breakout is coming soon.

What to Expect This Season

This is a good question. We said earlier that Bemstrom’s spot on the roster is not guaranteed. He’s likely not a top-six winger to start the season. Is there even room on the bottom-six now? And is that even his best fit?

Related: 3 Blue Jackets’ Prospects That Could Earn Roster Spots in 2022-23

Camp is going to dictate how this one goes. Kent Johnson, Yegor Chinakhov, Liam Foudy and others have their sights set on making the team. If they do, it’ll be in a bottom-six role. Bemstrom will have to compete with these players and show he’s ready to take the next step.

The fact that it’s a one-way contract shows that the Blue Jackets think Bemstrom will have a spot on the opening night roster. But this will be a fascinating battle to watch unfold. Can he make an impact away from the puck? This will be key for him to make the team in October.

As for overall expectations, it comes down to the role he’s asked to play. With Oliver Bjorkstrand off to Seattle, there could be a potential for Bemstrom to slip in there on the right side should his performance dictate that. Otherwise it’s best to keep expectations in check knowing his minutes could be limited. If he gets some power-play time again, 10+ goals is within reach.

Can Bemstrom Be Part of the Core?

Should Bemstrom start to live up to expectations, there is a chance he could be a part of the core. Both Gus Nyquist and Jake Voracek could be gone within a couple of years. This leaves room for Bemstrom to seize a golden opportunity.

It’s clear who the Blue Jackets’ core is. Johnny Gaudreau. Patrik Laine. Zach Werenski. Elvis Merzlikins. While Bemstrom is certainly not at that caliber, it’s reasonable to expect him to be an important contributor down the road.

Suddenly, three of your best wingers in Bjorkstrand, Voracek and Nyquist could be gone within a year or two and someone needs to step up. This is where Bemstrom can really shine. It’s now up to him to reach his potential and to make an impact on these Blue Jackets. A two-year deal shows the belief the team has in him.

First Bemstrom has to make the team though. If anyone needed to have an amazing summer, it was him. We’ll see in short order if he put himself in position to pay off the Blue Jackets’ belief in him.

I am a fully credentialed writer who covers the Columbus Blue Jackets, Cleveland Monsters and Erie Otters as well as the Ontario Hockey League and NHL Draft. The 2022-23 season will mark nine seasons with the Hockey Writers. I am also the site’s Credentials Manager.