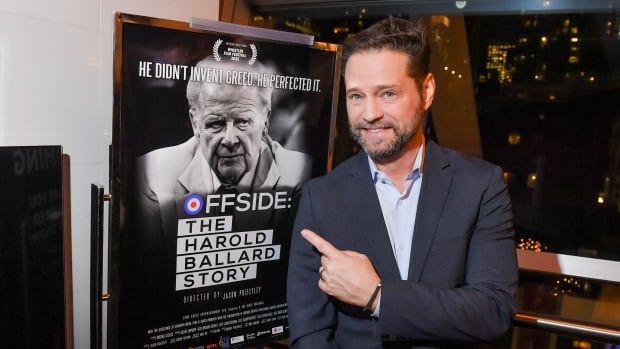 He has been a well-respected, working film and television director for 30 years, so it’s probably time to stop asking Beverley Hills 90210 questions in conversation with Jason Priestley.

Priestley has just released his documentary Offside about the man who literally lived in Maple Leaf Gardens and tried to cheat anyone who stepped foot in his house.

In a world full of brilliant subjects for sports documentaries, why spend time on such a controversial figure?

The answer, as Priestley passionately points out, is that the bad stuff is all that most people know about the man — but in private, Ballard had redeeming qualities. He was an incredibly generous philanthropist. He gave money away like it was going out of style, and he kept it under wraps because he wanted everyone to think he was a hard ass.

To his credit, Priestley never puts his thumb on the scale. He gathers all the contradictions about Ballard and leaves us to decide what to make of the man.

Why is it so hard to show speed on the screen? Watching F1, speed skating or the Tour de France you can never tell how quickly the subjects are moving. Priestley has a deeply detailed answer for that too.

Other seemingly random but definitely entertaining topics of discussion? What The Great One, Wayne Gretzky, did for hockey culture in Los Angeles. How the million or so Canadian expats in that town fight over slots in the beer leagues. And why actors want to be athletes, and vice versa.

There is a transcript of this podcast for our hard-of-hearing audience. To listen to Priestley, Mimi Rahneva, Cito Gaston, Robert Parish, Aaron Brown, Kaylyn Kyle, Kurt Browning, Bianca Farella, Summer McIntosh, Beckie Sauerbrunn or any of the guests from earlier seasons, go to CBC Listen or wherever else you get your podcasts.